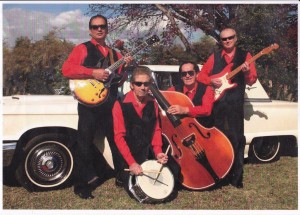 We are a four piece band of versatile musicians comprising of lead & rhythm guitar, bass and drums Collectively we have many years of experience playing in various bands but have now teamed up to form a group delivering that unique live band sound but with minimum personnel.

Recently we have added an experienced keyboard player for those venues that require a 5 piece band. Our roots are in Rock Roll and we cover a variety of numbers from the 50 s, 60s ,and 70 s played at such venues as Bankstown Trotting club, Lidcombe/ Catholic Club as well as Ramsgate, Smithfield, Five dock, Campbelltown and Camden RSL and Maroubra Seals securing return appearances. We have also had a number of return, three night, and engagements at The Commercial Club, Albury, where we have built up a following.

The band being very versatile can cover Latin, Boot Scoot n and Rock n Roll for listening or dancing pleasure. Our ethos is to provide entertainment for patrons in a responsive way and endeavour to afford everyone a good night out.